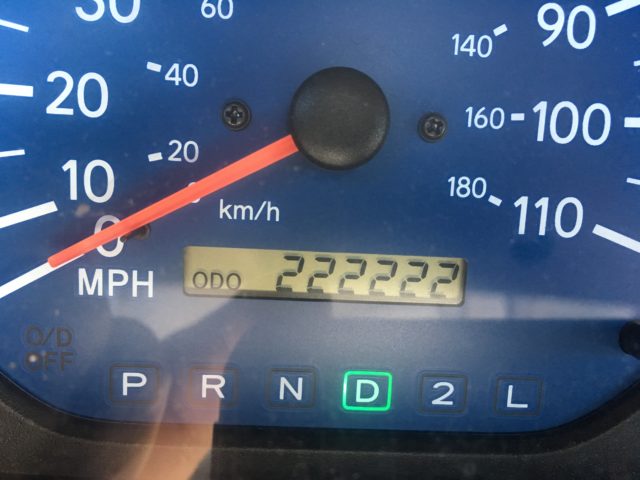 Thank you, 2002 Toyota Sienna with two hubcaps on the other side:

Then there was the time the gas tank fell off:

I spent the previous three days criss-crossing the state at 70 miles per hour in a van full of books and music gear, so I counted it a blessing that I was three miles from home and sitting still when the gas tank fell off.

It had been a trying day. For starters, when I fired up my laptop a puff of smoke emerged. It was if the hard drive had chosen a pope, and for his first trick he turned my computer into a brick. Off I went to the laptop hospital. Preoccupied with sad computer thoughts, I opened a garage door, hopped in the van, and backed into the garage door I had not opened. I didn’t blast through it, but I warped it good. It took three karate kicks before it would raise.

The computer doctor confirmed a terminal diagnosis requiring transplant. I headed home in a mope. As I turned on to Schumacher Road I heard a thump from the back of the van. I drove on. A stray guitar amp, perhaps. Plus when you’re rolling a 2002 Toyota BandVan, a thump ain’t nothin’.

But then came a second thump. You get two thumps, the second one louder, you gotta investigate. I eased to the shoulder and stepped out for a look.

At that very moment the gas tank dropped from the chassis and hit the asphalt.

While you entertain yourself with visions of my reaction, I’ll cut ahead to me leaving a voicemail with Kris, our mechanic. With his business partner Justin, Kris operates out of a converted car wash, has never steered us wrong, aligns his recommendations with our budget, and—this is the best sign of all—can be tough to get on the phone because he’s so busy. He’s not “ours” of course, but we think of him as such because he is “gotta guy” certified, as in, “Yah, I gotta guy…”

“Can you reattach a gas tank?” I asked when Kris called back. I’ve learned to cut right to the chase. Kris is not about the chit-chat. “Yep,” he said. “Did a couple last month. Just gotta order the straps.”

I typed this column on the formerly smoking computer. That was a spendy fix, but well done and worth it. The garage door is still kinda bowed out there at the bottom, but goes up and down. The van has put on many thousands of miles since the tank graft took. I was just in to see Kris this week with our plow truck. He got the four-wheel drive working just in time to beat the blizzard. He and his crew were on a dead-run hustle, as usual. Good work gets you good work.

It occurs to me much is revealed about my character, the level of my achievements, and the nature of the vehicles I own, by my frequenting a mechanic who is commonly acquainted with the reattachment of gas tanks. I imagine sometimes what it would be like to call your higher-end service departments with the same request. Deal is, if the gas tank drops off your Escalade, gimme a call. I gotta guy…