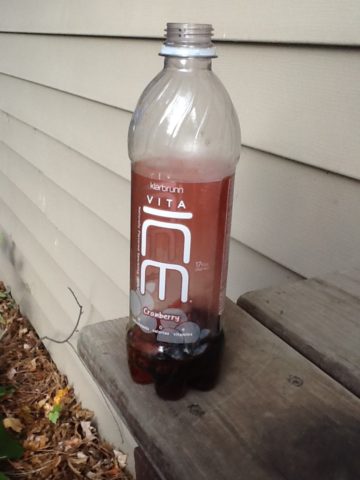 After an evening speaking engagement, I stopped at a gas station and bought the drink pictured above. During the short drive home, I drank about half of it. Parked the van in the garage and left the beverage in the cupholder. The next day I was up early to speak at a local school. When I finished doing two presentations I was a tad dry, so just as I was about to drive off I reached down for the drink and took an absentminded swig. The weight of the bottle shifted oddly as I lowered it. I looked, and was surprised to see a used tea bag suspended in the liquid. My wife and daughters sometimes take tea for the drive to school, but it still seemed an odd thing to do.

Then I looked closer. Yah. That’s a drowned mouse.

I bailed out of the van. Aware that I was in full view of a school full of impressionable children, I ducked down beside the back bumper and blew that mouthful of bad pop all over the blacktop. Even as I was spitting like a mad cat with a mouthful of stinkbugs, I was offering prayers of gratitude that I had discovered the mouse before I swallowed. As discreetly as I could, I got back in the van, found a mouseless bottle of water and commenced to swish and spit like I was in some sort of dental appointment Olympics.

I also looked more closely at the contaminated bottle. Yah. Not one, but two mice.

If you wanna, I got closeups after the break.

That is all, really. Not much more to do but remind you to: A) always cap those drinks, folks; B) enjoy your lunch (by the way: I neither puked nor retched; where do I pick up my medal?) and; C) I have books and whatnot for sale.