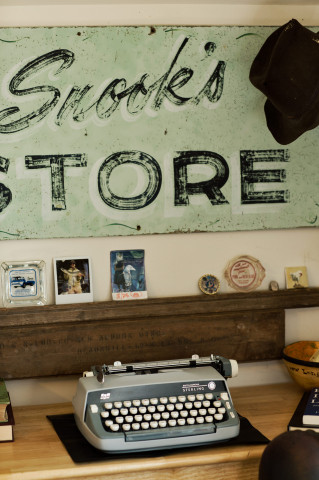 Don’t know if it’s a good idea to post this. It’s a blunt, rambling, non-fact-checked but heartfelt response to a young person who is self-publishing a book and wrote to me asking for advice. I’m sure it’s full of holes and missed opportunities and stream-of-consciousness errors, and frankly there are different and better ways to be a writer. But maybe someone out there will read it and see little light, get a little lift, find his or her way back to the lonely chair. Really, it’s all about the last two paragraphs. Or even just the final paragraph.

I’m not sure how much help my advice will be, since I’m one of the old guys now. Also, people sometimes don’t care for my advice because I’m pretty frank about the business end of things. But my roughneck theory has always been that you take care of the business end so you can spend more time in the artsy end and not have to punch anyone else’s time card.

So yah. I say a lot of corny things like I learned to survive as a writer by cleaning my Dad’s calf pens: Just keep shoveling until you’ve got a pile too big to ignore. Corny, but the absolute truth at least in how I’ve survived. This week I’m finishing a book manuscript, wrote a radio script, will record the radio script tomorrow, wrote a column I’ll edit tomorrow, did research for a television appearance, am in the early stages of writing a magazine piece, am booking speaking engagements for the next year, getting my quarterly taxes in order, and so on. Plus feed chickens and split firewood. I’ve had more success than I ever hoped (partly because I never hoped, I just DID, often while not having a clue) but woulda made more money if I’d stayed in nursing all these years. I don’t care ’cause it’s been such an interesting ride, and I’m certainly not complaining. But I bring it up because sometimes there is this impression that I’m just sipping tea as the royalties pour in, when in fact last year’s royalties came to exactly 1/16th of the family’s health insurance premium. Which is so much better than no royalties at all.

So. Point is, barring the big breakout hit, a writer’s gotta hustle. Which you apparently are already doing. So you have a head start.

Now’s the part where my advice might break down (wait, have I even GIVEN any advice yet?) because I am old. I got started by A) quitting my real job and taking a near-minimum wage job that would allow me to devote 90% of my brainspace to writing, and B) doing anything remotely related to writing: radio ad scripts for used car dealers, brochures, speeches for hospital executives, local frozen pizza commercials. Meanwhile I wrote for the local newspaper and magazines, and sent my work to hundreds of magazines and journals all around the United States. I also self-published four books (one was awful, one was pretty bad, and two were OK). This was before print-on-demand, so I’d save enough money to print 500 or 1,000 then head out to sell them on a folding table set up at craft fairs, the mall, gas stations, you name it. When I finally got a book contract with a big publisher I’d been writing and surviving for over a decade.

These days, thanks to everything from Amazon to digital-everything, the book industry is in a state of perpetual flux. Harder than ever to survive at it. Good news is, we can all publish whatever we want, whenever we want, without some gate-keeper telling us no. The not-so-good news is, getting something published does not equal getting eyeballs. We all want eyeballs. There are wonderful stories of obscure small-town folks self-publishing and then selling a million. I hope that happens to you. I hope it happens to ME! On the other hand, to increase your odds you will want to throw yourself into understanding book promotion (sounds cheesy but it’s basically just you finding ways to get those eyeballs…I do it with everything from Facebook to old-fashioned postcards to driving tens of thousands of miles per year to get myself (and my books) in front of people with … eyeballs) (in the case of my friend “Bob the One-Eyed Beagle” just one eyeball will do) and the book business. Book business being, understanding distribution models, formatting, ISBNs, contracts, hardcover vs trade paperback, sales tax implications, order fulfillment, etc., and so on. Things like making sure when you sign with a self-publisher you aren’t giving away any important or long-term rights.

I’m not very good at the business part. The one thing I’ve always clung to is low overhead. In other words, don’t get yourself in a hole you can’t dig out of. That’s why I’d save my brochure/used car ad money until I could pay for those 500 books up front. That way if I didn’t sell any, I could at least burn them over the winter, thus staying warm and not owing anyone money. I frequently talk to people who have spent thousands of dollars to get a book published and then are struggling to sell it. It’s heartbreaking and an example of why—whether it jives with your concept of “art” or not—understanding the business/marketing end is so important.

As far as CrowdFunderIng and similar sites, I’ve had several friends (musicians, mostly) go that route, with mixed results. The biggest success stories tend to be people who are already somehow famous. I’ve had better luck just working extra on the side and taking that money to fund the project. But again, I’m old. And if I understand crowdfunding correctly, you can try it and if you don’t make your goal you’re not on the hook. I think? So even if it flops, it’s like free tuition. You’ll learn something in the process. And if it’s a success, well, off you go.

Another problem with crowdfunding type sites is donor fatigue. I get asked all the time to promote them in my Twitter feed or blog or Facebook but the truth is I can’t because people will weary of it and I’ll lose followers. Again, that doesn’t mean you shouldn’t try it. The upside has a lotta upside, and the downside seems minimal.

I would also recommend that you do your market research and pitch the book to mainstream and regional publishers. It’s an extreme longshot, but if someone bit on the book, they’d cover these initial expenses. [I often say my mainstream publishers do a terrific job of matching their big thing to my little thing. Sounds a little sketchy, but y’know…]

Here’s the thing: There’s no one way. If you could trace my footsteps backward over the past 25 years you’d see about 50% plodding, 47% stumbling and 3% sprinting. You’ve already shown creativity and initiative. You’ve got the crazy beautiful ideas thing happening, and congratulations for that. All this old guy would say is don’t let the crazy beautiful ideas part get buried in the mundane gotta pay the bills part. Until either one of us gets silly rich, we both still have to pay the electric bill so we can see to create at 2 a.m..

OK, here is the cheesiest and truest thing of all: First of all, above all else, never mind business, never mind art, you have to be in love with the thing. The process. The experience. For 25 years, first thing I’ve wanted to do when I woke up every morning is find a keyboard and write something. Including this morning. Lucky me. Grateful me.