Came across a notebook page containing early notes toward the song “Tiny Pilot” from the album of the same name. 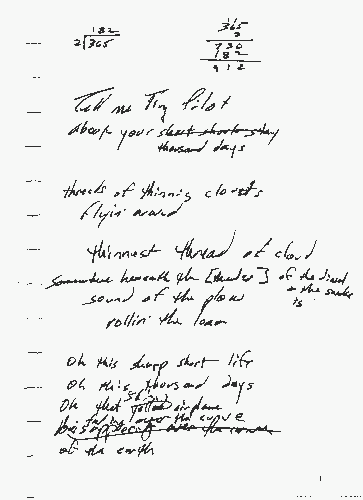 The lyrics as they were first scribbled out and marked up:

The final recorded lyrics after the jump (plus an explanation of the math):

Tell me little farmer’s son
Can you see your daddy tilling?
Somewhere between the rumble
Of the diesel and the smoke
Is the sound of the plow
Rollin’ the loam
Rollin’ the loam

Tell me little mother’s son
Do you see her there?
Kneeling on the ground
Between the tall corn
And a county road
Brushing at the headstone
Smoothing the dirt
Lilacs gone to seed
Somewhere the song of a bird
What’s that she heard?
Lonesome drone
Way up high
On the fade…

Oh this short, sharp life
Oh this thousand days
Oh that shiny airplane
Fading over the curve
Of the earth

P.S. This song was written in memory of my nephew Jake.  It appears that the math was me figuring out that he was with us less than 1,000 days. The song is meant also to honor his family, with whom he lives forever.