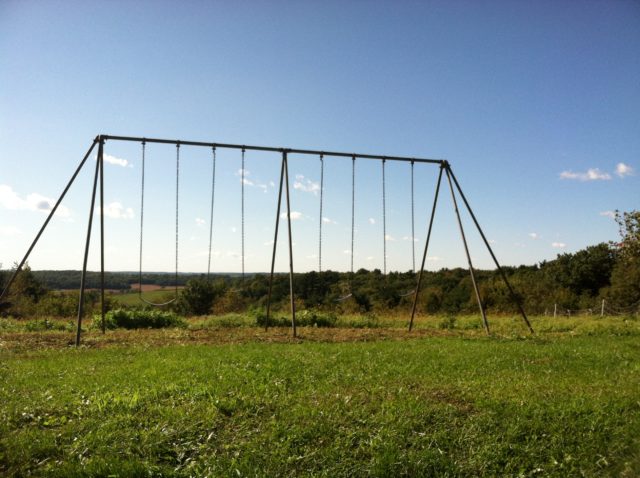 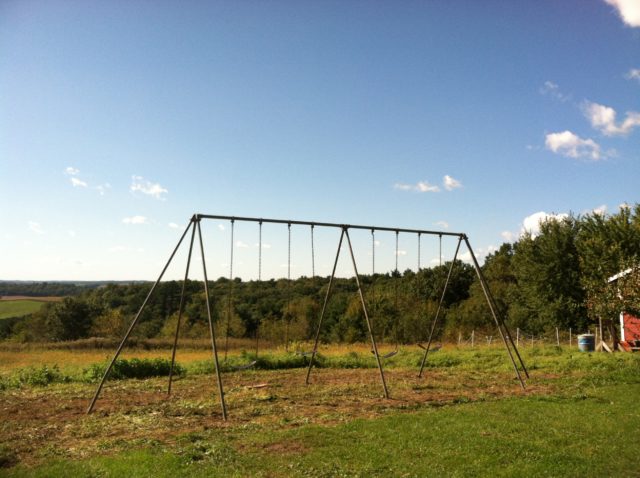 Pretty happy about this. A heartfelt thank you to neighbor and friend Mark for big help with final phase.

In a “Roughneck Grace” column published earlier this spring I told the story of how this swing came into our possession:

My gut seized up a little when the man looked at the 8-foot bed of my old pickup truck and said, “You do realize the top bar of this swing set is 20 feet long, right?”

This day was traceable back to my father, a hardworking farmer with an affinity for swing sets. At family reunions in the park, he’d take his turn with the kids, the taller the swing the better. Eventually my brother John built a towering swing set in the yard at Dad’s farm, welding the whole works up by himself, fashioning the hangers, the seats, the trapeze. That set has led to thousands of happy hours for adults and children alike, especially when we all gather on Sunday afternoons. My daughters so loved the big swing that they’ve often asked for one of their own.

Time slips away, so when they asked again last month, I went online and did my research before the swing went the way of the tree house I still haven’t built. Got a little sticker shock at what an old-school, playground-style swing costs new. Considered ordering the parts and whatnot, get my own pipes, build it myself. Recalled the unbuilt tree house. Hit up Craigslist. Not only found an old-school playground-style swing — heavy-duty galvanized pipes, hefty chains, and belt seats — but one from an actual school playground, and at a slim quarter of the price. Disassembled and ready to go, said the guy on the phone. Only catch was, the set was in a large-ish Minnesota city nearly two hours away. Before I left, my wife asked if I’d verified that the parts would fit in the pickup. Won’t be a problem, I said, meaning I’d “eyeballed” the picture on the Internet. “OK,” she said, in the way she often does when she sees me hurtling toward walls of my own building.

So I thought of her then as I stood in the cold rain two hours from home and realized there’d be more pipe sticking out of the back of the truck than in the truck, and those were the short pieces. That 20-footer? It’d hang out there like the crane off a shrimp trawler.

By the time I left the premises, I’d deployed every available bungee, ratchet strap, and rope in an attempt to secure the pipes. The seller gave me four concrete blocks to weigh down the butt ends to keep the whole works from levering over the tailgate. Finally, digging around in my EMT kit, I found some bandaging tape and used half a roll to affix a blaze orange safety vest to the end of the 20-footer. When I stepped back for a look, the truck was squatting and looked like a homemade anti-aircraft rig flying the flag of some deer-hunting militia.

I didn’t even make it through the first traffic circle before the pipes shifted, nearly wiping out a street sign. I had to reposition and re-do all the strapping as the cold rain gullywashed my neck.

The trip home took nearly three hours. I drove every foot of it tensed in anticipation of the rotating red-and-blues in my mirror. I wasn’t even close to legal. One of the neighbors saw me in the final mile. “What the fuzz were you thinking!?!?” he said later, or something like that.

And now we’ve got one