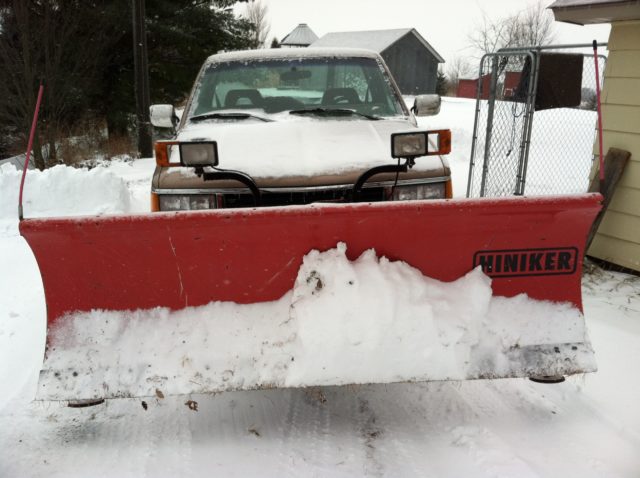 Let it be known that on this day I mounted the snowplow in under seven minutes.

Before the snow flew.

Without the golf ball.

It is not always thus:

EVEN THE GOLF BALL WON’T help me now. “This one’s gonna be a golf-ball job,” my father would say while securing the hay baler power takeoff shaft in the shop vise prior to replacing the universal joint bearings— a real knuckle-busting spirit-warper of a job. We kids would grin because we knew Dad— a studiously nonprofane man— was referring to a long-standing joke he picked up from his last factory job: Before undertaking a difficult task you place a golf ball in your mouth to block the bad language. It’s a perfect kid joke because it combines a goofy image with the illicit implications of naughty words.

Mounting the snowplow should not be a golf-ball job, but it is. As with many once-a-year tasks, I complete it with roughly 75 percent efficiency, and, boy, that other 25 percent is a real steam generator. Today I had already scuffed a knuckle and was only just managing to keep a lid on the fizz when I crossed behind the truck in frustrated haste and rang the trailer hitch with my shinbone, resulting in an impromptu performance piece I like to call the Howling Hopscotch of Rage. Only an asbestos-coated golf ball would have survived.

I am in haste because drifts are sifting through the gap beneath the pole barn door, and the steel roof is rattling with wind. It is the second week of December, and we are about to get a whomper. “Blizzard of the decade,” said ol’ Jay Moore in the Morning on Moose Country 106.7, and I have procrastinated mounting the plow until I saw the whites of the flakes. Tut-tut, say the strict calendarists among you, and fair enough, but then as the cut-rate Scandinavian Zen master Yogi Yorgesson famously never declared, “Who sniffs the rose before it blooms?”

– Michael Perry, in Visiting Tom: A Man, a Highway, and the Road to Roughneck Grace