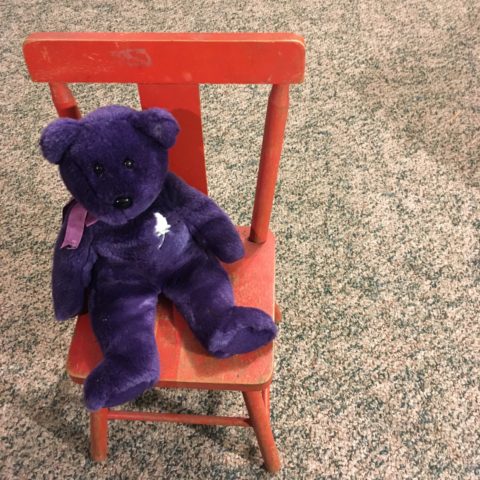 There was a time I sat in that chair.

And my father before me. And then my daughters. Now that teddy bear’s the only one of us who fits. He first entered my little writing room above the garage in the arms of my elder daughter, and when she outgrew the chair and the bear, she passed them on to my younger daughter.

Time rolls on. The elder is in her 20s, the younger is a teen, but that teddy bear and I still hang out. I like to look over from the desk and see him there and think–even in troubled times–of the joys I’ve been allowed.

We keep pluggin’ away here. In a year that’s already seen the publication of Million Billion and Big Boy’s Big Rig, I’m just now putting the finishing touches on a new collection of “Roughneck Grace” essays. If the wheels stay on the wagon, they’ll be out in October. Tentative title: Peaceful Persistence.

I’ve got a novel ninety-percent done. I wanted to have it out by now but it’s being difficult. It’s also the darkest thing I’ve ever typed, so I’m nervous about releasing it.

Nearly done with the Scavengers sequel and the book about fathers and daughters. I swear they’ll be out in 2021. Wheels, wagon, etc.

We just printed up a fresh batch of Sneezing Cow t-shirts because our last batch sold out. I believe their enduring appeal is due to the phrase on that shirt being the truest thing I ever wrote.

Subscriptions to “Michael Perry’s Voice Mail” have exceeded our expectations, for which we give thanks. For the different subscription levels, from free to paid, please have a look right here. (Scroll through, some of those are free, you don’t need a subscription to read/listen.)

“From the Top” is now available as an audiobook on just about every platform out there, including iTunes and Audible. Paper version here.

You can listen to Mike on Tent Show Radio here anytime…scroll down for musical guests ranging from Steve Earle to Trampled by Turtles to Judy Collins (turns out she’s hilarious).

The pumpkins have turned and so have some of the leaves. Headed for the season of orange…just like this guy’s cap.

Folks, I’m typing this up looking out over the back forty as the day comes to a close. These are tricky times. But every one of you who’ve ever read a word I wrote or heard a word I spoke, you’ve built up stores of gratitude I will never exhaust.