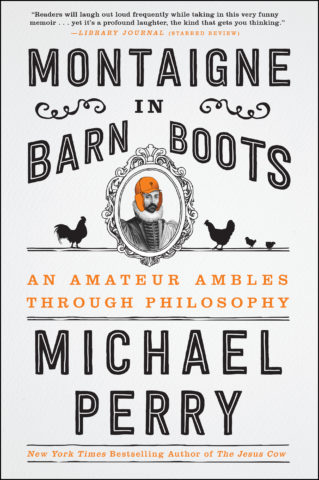 NOTE: The paperback version of “Montaigne in Barn Boots” is available from the online outlet of your choice (including signed copies) here (and early orders get a free copy of “The Clodhopper Monologues“). In light of how things (and authors) change (or stubbornly don’t) between the time a manuscript is completed, comes out in hardcover, and finally paperback, I’m composing a series of posts reflecting my thoughts on the book and/or Montaigne himself since the original manuscript was accepted.

MONTAIGNE AND MERCY (from Wisconsin State Journal column of October 7, 2018)

I have been lately revisiting my old friend Michel de Montaigne. In fact I rarely stop pestering him. It’s a figurative and lopsided relationship what with him having died in 1592. His Essais have long been a favorite read and re-read of mine, but just recently I’ve been chewing my way through a book called Montaigne and the Quality of Mercy. I got the tome by chance and charity while I was passing through Viroqua, Wisconsin, where Eddy Nix of Driftless Books opened the door to his bibliophilic barn and said, “Go ahead, take one.” This is a questionable business model, and I went for it, heading directly for the philosophy shelves. I spotted Montaigne’s name on a spine, and searched no further.

Montaigne and the Quality of Mercy was published 20 years ago. Author David Quint is a professor of English and comparative literature at Yale. I hope he doesn’t mind me reading his work while plopped in a tree stand, because it is getting to be that time of year. His wouldn’t be the first of my books to smell faintly of Tink’s #69. That last is what you call a niche reference; those of you who need to get it will.

But: mercy. It seems quixotically quaint to give this concept quiet consideration while the national conversation “unfolds” like a wasp-infested slime typhoon, but in the preface, Quint reminds me that Montaigne was living and writing in a time of civil war. He observed firsthand, Quint writes, the damage done by “the hard-liner who never yields,” whose “obstinate virtue” has boiled down to pride and self-interest. Instead, Montaigne was interested in a “pliant goodness” that might result in a spirit of accommodation manifest as mercy.

That’s all from just the first page of the preface. I’ve already made a lot of underlines, and have read some paragraphs six or eight times. It’s an escape of sorts, this kind of reading. Human thought and behavior set in ink, pinned to the page so it can be studied and re-studied as opposed to the non-stop online outrage scrolling to which I am commonly susceptible. The static page encourages rationality. And reflection.

When I settle in with a book like Montaigne and the Quality of Mercy, I am reading above my pay grade. There is stuff here I couldn’t parse if you gave me chopsticks and a forklift. But I love the cotton-headed tussle of it. And the access of it: The idea that I might take the better products of Yale (“better” inserted with specific intent) up a tree stand purchased at Menards and emerge from the woods more broad-minded; more merciful. I still gotta do the chicken chores and pay the electric bill and empty the dehumidifier and I’m not in line for sainthood or tenure or a position of paid punditry, and I still like eating Slim Jims gas station doughnuts the Packers and wow there’s still a lot of pages to go, but the last phrase I underlined before placing the book flat for now was, “some form of human dignity is indispensible,” and that’ll do to pursue for now.