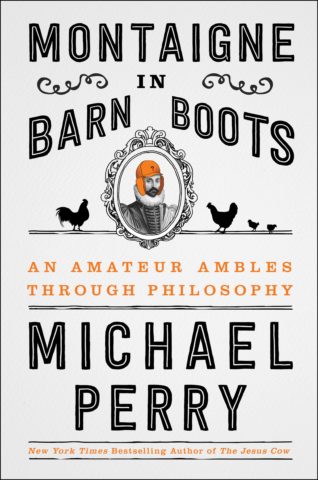 While flying east to tour for Montaigne in Barn Boots I re-read some of the book to prepare for my New York and Connecticut events. This passage (from Chapter 9: “What To Do”) has fresh resonance:

As I type these words, I am fifty-one years old. Middle-aged, late middle-aged, whatever. Not young, not ready to flop and stop. Raised to respect my elders, I have now watched many of them grow brittle of thought and bitter of mind. It seems that somewhere around my current life stage, people make one of two moves: Some stiffen, dig in their heels, and attempt to block the future; others reinvigorate life by blending it with the spirit of youth. I hope I will— and I am working to— bend toward the second. I am not talking here about the embarrassment of an oldster trying to vibe with the kids. Nor am I talking about abdicating principles. I am talking about offering a hand, opening new doors, and sometimes— when new blood is best— stepping aside and standing down. “Youth is making its way forward in the world and seeking a name: we are on our way back,” said Montaigne, who felt that too much was made of mere seniority and often punctured the idea that age automatically conferred wisdom or compelled deference. Rather, it “imprints more wrinkles in the mind than it does on the face; and souls are never, or very rarely seen, that, in growing old, do not smell sour and musty.”

Recently I told someone I was learning a lot from Chance the Rapper. The person responded with a chuckle, but I was dead serious. I wasn’t looking to co-opt the art of this twenty-three-year-old man, or dress like him, or try to fake up some hip appreciation of his oeuvre; rather, I was observing how he carried himself as a citizen, as a partner, as a father, and as a self-employed artist. I am working on this idea, striving for this balance, by which in growing old I might benefit from some youthful osmosis.