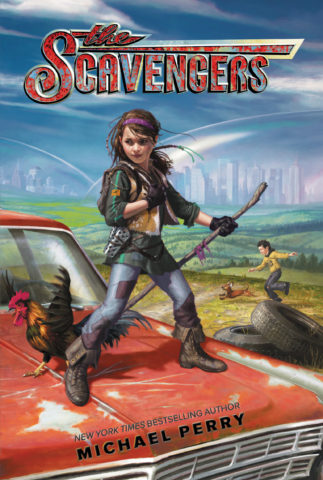 Re-reading The Scavengers as I work on the sequel, and chuckled when I came across this Easter egg insider joke I had forgotten about:

Dad goes into the shack to wash up. When he comes back out he’s wearing his favorite T-shirt. “Figured I’d get dressed up for dinner,” he says, and once again it’s good to see him smile. The back of the blue T-shirt is decorated with an illustration of an old-fashioned door lock, and the front has an illustration of a key. Above the key hover the words “Bon Hiver.” Dad says Bon Hiver was a man who lived alone in the forest and made music. Eventually his music made him famous, but he slowly went crazy after years of explaining that “Bon Hiver” was supposed to be pronounced “bony-vair.” Whenever Dad tells me that story he puts his finger in the air and says, “Moral of the story?” And I say, “Careful what you wish for.”

Rough draft due in March. Finished book due out in 2019. Original hardcover here, paperback here, audiobook here. And there’s still a semi-hidden “holiday special” on the paperback page (audiobook for $5).