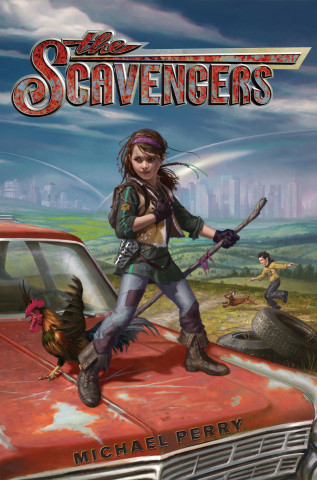 Want to read the Introduction and Chapter One of Scavengers? Click “more” below:

The old car was sunk to the bumpers when I discovered it, but my first thought was how good it would be to sleep in there and hear the rain drumming on steel rather than splattering against our tattered old tarp.

I was Maggie back then. Maggie, the name my parents gave me. A nice name. But these weren’t nice times. We were tired and hungry, and the GreyDevil bonfires were burning brighter and the solar bear howls were getting closer, and every morning as I strapped my SpitStick across my back and set out to scavenge, I found myself thinking I needed a better name. A stronger name.

I mean, the name Maggie was fine, it just seemed kinda underpowered.

So when I scrubbed the moss from the side of that old car overlooking Goldmine Gully and saw the chrome letters—Ford Falcon—I climbed up on the hood and stood there with my steel-toed boots planted wide and I wedged my fists on my hips and I announced that Maggie was yesterday, and from this day forward I would answer only to Ford Falcon. Ford, because we had a lot of rivers to cross. Falcon, because, well, if you have a lot of rivers to cross, a pair of wings can’t hurt, and then once you get across the river it’s likely you will need sharp eyes and an even sharper beak.

Yes. I know. I named myself after an old dead car. Worse yet, it’s not even a cool car. It’s a station wagon. Station wagons were how parents hauled kids around during the time between covered wagons and minivans. These days you won’t see a minivan unless it’s being pulled by a horse, and even horses are hard to come by.

But if you see me you will know me because I wear a vest made from the hide of a beast that tried to kill me and lost. I skinned that beast myself, and also I skinned the lettering from that old dead car and stitched it to the vest across my shoulder blades using copper wire so that in polished chrome the world can read my name and know it: Ford Falcon.

Way down in Hoot Holler, Hatchet the Rooster is ruling the roost. It’s tough to rule the roost when all of your cock-a-doodles sputter out like you’re gagging on a crossways caterpillar, but Hatchet’s ego is twice the size of his multicolored mop of a Technicolor tail, and I guarantee you by the time that last kack! echoes off Skullduggery Ridge he’s already fluffing his feathers and strutting around like that’s exactly what he meant to say.

Hatchet belongs to our neighbors Toad and Arlinda Hopper. They live a half-hour hike away, down the western side of Skullduggery Ridge, but even though we can’t see their farm from here the crowing comes through loud and clear. That rooster has brass lungs. And once he gets started, he doesn’t stop. He’ll crow at noon, he’ll crow at the moon, he’ll crow any which way the wind blows. Most of all, he’ll crow whenever he feels the need to remind the world that he is a rooster, which is about every six minutes. That bird is as loopy as a ball of snarled yarn.

Guess I’m done sleeping. I crawl out of the station wagon and climb onto the hood. Dawn is still a ways off, but even as I pull my quilt tight around my shoulders birds are twittering in the darkness around me— that is, when they aren’t drowned out by all the cock-a-doodle-acking.

On the horizon before me there are two faint gray smudges of light. One is the first hint of sunrise. The other is the glow from the lights of a Bubble City. I’ve never been to any of the Bubble Cities, but once when I was helping Toad tear apart a junk car I found a brochure under the backseat that said Your Bubble City! Inside it had a lot of pictures of happy people laughing and playing volleyball and eating ice cream cones. The brochure unfolded like a map to show more happy people doing more happy things—swimming, dancing, walking through flowers, laughing on rides in an amusement park, jumping on trampolines (Toad had to explain to me what volleyball, amusement parks, and trampolines were)—and when it was all the way unfolded you could see a shiny bubble shimmering above all the people. I told Toad it looked pretty neat. He just shook his head and said something about not believing everything I read.

As the gray horizon oozes over to pink, the glow of the Bubble City fades and the landscape takes shape, sloping sharply away to the east from the Falcon’s front bumper before rumpling itself into foothills that bump along for many miles into the invisible distance. I wonder sometimes what my life would be like if Dad and Ma had stayed UnderBubble, as everyone out here calls it. Instead, they chose OutBubble, and believe me, there is no volleyball or ice cream cones OutBubble. As the last of the glow disappears into sunlight, I wonder if there are girls my age waking beneath the Bubble, and what their day will be like compared to mine. Now the parrot flocks are squawking. This makes me grin, because it means Hatchet is getting some competition. Dad and Ma tell me there never used to be parrots here unless they were in cages. Now they swoop around all over the place. My parents say the world has changed a lot since they were children. Back then, people argued about whether the earth was warming up or cooling down. Well, the weather did get warmer— we don’t really have winter anymore— but mostly it just got weirder. The seasons are all skittery. Sun for a month, then sleet for a week. Snowdrifts on Tuesday, puddles on Wednesday. Our oak and pine forests got more jungly and leafy. The parrots moved in, and other newcomers followed. Wild hogs, alligators halfway up the Mississippi, sky-blocking flocks of turkey vultures, and scariest of all, solar bears. Solar bears were created when government scientists tried to save polar bears from extinction by crossing them with grizzly bears and splicing in a dab of coyote DNA. The result wasn’t really a polar bear or a grizzly bear, but a four-legged experiment with white fur and caramel-colored stripes, big teeth and bad breath, and a howl like its tail is caught in a crack. One thing the scientists maybe hadn’t kept in mind is that bears can range hundreds of miles, so after the weather changed it wasn’t long before they migrated down into this area. There is a reason I never go anywhere without my hunting knife, my SpitStick, my ToothClub, and a sack of pepper-pea pellets. I made all of those weapons myself, and they’re on the car hood beside me this very minute. Well, except for the knife, which was given to me by Toad and I carry sheathed in my boot top.

The sun is nearly up now. In the lower valleys I can see smeary patches of smoke drifting from the last of the GreyDevil bonfires. Nobody really knows where the GreyDevils come from, but we’d all be happier if they went back. Toad says they probably started out as humans like us, and that’s why we should try not to kill them, but they’re pale and dirty and instead of talking they moan and howl like sickly solar bears. Creepy. Every night they build big bonfires of whatever trash and wood they can find, and then gather around to get all hopped up on PartsWash.

PartsWash is homemade hooch. It’s fermenty and disgusting and got its name because it smells like something a mechanic would use to strip grease from old engine parts. Plus, based on the way the GreyDevils look, if you drink it long enough, it’ll pretty much wash away your parts.

PartsWash is brewed by gangs we call Juice Cruisers. The GreyDevils steal anything they can lay their hands on and trade it to the Juice Cruisers for PartsWash. Then the Juice Cruisers turn around and trade and sell the stolen things wherever there is a market, which is pretty much everywhere, because these days, here in OutBubble world, there’s a shortage of everything. I’ve never met a Juice Cruiser, and never hope to. Toad says they are outlaws who will leave you alone if you leave them alone.

I don’t know exactly what the Juice Cruisers put in PartsWash, but it must be powerful because the GreyDevils will do pretty much anything to get more, which is why they’re dangerous— at least until evening and they start drinking. The bonfires burn all night long until the PartsWash is gone or the last GreyDevil has collapsed. From up here, the countryside looks all soft and gentle and newborn. But those smoke smears remind me that this is not paradise.

Also, there is that rooster. No sound like that would ever be allowed in paradise.

Uphill from where I am sitting, I hear a noise. I turn to look and see Ma step out of the shack with her pans, ready to cook breakfast.

It’s time to begin the day.