Last week while driving cross-country (well, from Lansing Michigan to northern Wisconsin by way of Chicago and some assorted zig-zags) I did a little music prospecting the old-fashioned way: by twisting the car radio (yes, I twisted, did not cheat with “SEEK”).  Among the songs that caught my ear:

My Poker Face, by Lady Gaga.  Last thing I’d have ever sought based on the artist and oeuvre, but dang, it gets in your head.  A tad naughty, of course.  But further evidence that confection is fun.  Quite an outfit she wears for cleaning the pool.

Why Does My Heart Feel So Bad, by Moby.  Downloaded it when I got home, listened to it on repeat while I wrote.  Never got the Moby thing, but I like this.

But then the real fun began…

Sometime during my junior or senior year in high school, when my hair was feathered and my heart was tender and my nights were filled with tragic pining for love lost, lorn, and loopy, I heard a song that expressed all my inner yearning.  I remember I bought the cassette.  And I remember the guy on the cover was wearing a striped shirt that matched the stripes on the album.  At some point the tape became garbled and the cassette got tossed (although knowing me, it’s probably in a box somewhere in my pole barn).

Time passed.  My hair went from feathered to spiked, went from spiked to all-out Skynyrd, and then just went.  And throughout those follicular fluctuations I’d think of that album and try to remember the song, or the artist.  For some reason Marshall Crenshaw always came to mind, but it wasn’t Marshall Crenshaw.  Even with the advent of the Intergoogle I couldn’t manage to find the album, despite my “striped shirt album cover 80s” search attempts.  Somewhere out there, I knew, was a song that would resurrect my 17-year-old’s angst, and I couldn’t for the life of me find it.

But then I’m diverted off I-94 for a wreck just outside of Milwaukee and I punch up a song with a hook that jiggles me down around the appendix area.  The site of all repressed 80’s memories.  Is this the song?!?! I’m pretty sure it isn’t, but it’s hitting all the right buttons.  It has immediately made me think of the striped shirt album.  I listen all the way through, and the deejay identifies it: “I’m on Fire,” by the Dwight Twilley Band.

Not the song.  But still, the appendix tingle… 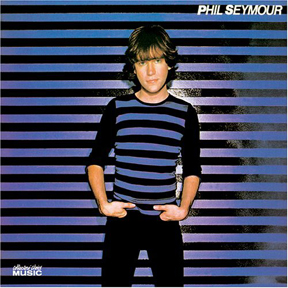 Next, of course, I had to find the song.  Couldn’t find Seymour on iTunes, but did find him on YouTube, singing “Precious to Me.”  Great song, great memory, but still not quite it.

But the next click…there it was.  The song I’ve been missing for years.  “Baby It’s You.”  I am seventeen again, lip-syncing in my bedroom mirror.

Sorry you had to see that.