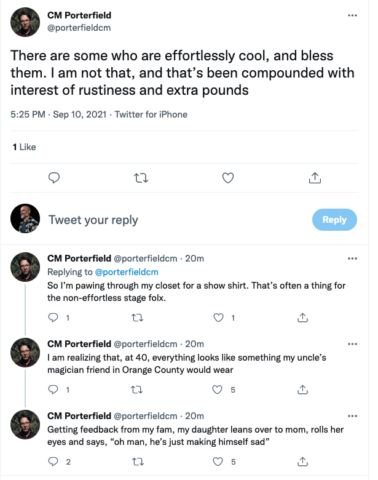 I have just been to a fashion show in my own house, featuring me. The runway was the hallway to the bathroom, with a dogleg left past the woodstove into the living room. The audience sat on the couch and consisted of my wife and two daughters. Flash photography was forbidden, as Dad does not wish to wind up shirtless on SnapChat in light of certain lard-based gravitational issues.

My sartorial state is a source of long-term despair for everyone in my immediate family except for immediately me. There was a time now decades distant when I cared how I dressed, and this led to some egregious overshoots including bolo clips, popped collars, a pink silk head scarf, wrestling shoes worn with my jeans tucked in, open blazers with the cuffs rolled, more than one trench coat, and, for a while, an affectation of hats. The arc of fashion bends toward reality, and eventually I settled into a reliable groove of sturdy boots, no-name jeans, and free t-shirts. This has saved me a lot of time, cash, and retrospective humiliation.

As a clothes rack, my body is a stack of used tires. Even fit and fine I’ve always been shortish and stocky-ish, and no matter what those men’s magazine photo spreads tell you, nothing dresses a man better than being six feet tall with narrow hips and just one chin. Unfortunately, recently my wife read one of those men’s magazines, specifically a section on how to decorate certain body types (“balding husky,” anyone?) and, after a trip to town centered mainly on clearance bins, the three people I share my house and life with staged an intervention.

Apparently the triggering event was a recent speaking event at which I appeared in my favorite pair of jeans, which are still my favorite even though I have waddled a hole through the left inner thigh. There was concern that from an audience perspective it might be possible to determine my underwear preference. It was also noted that the t-shirt I was wearing bore evidence of the grease from a pre-millennial gas station mozzarella stick. Sometimes I think they’re just looking for things to criticize.

I had packed the van for a concert that evening and run into the house for a quick shower when I found the three of them waiting on the couch beside a card table stacked with clothing. There was no escape, and so it began: Into the bathroom to change, then out in my socks to stump through the gauntlet of gaze: My wife, looking on benevolently, hoping for the best; my 9-year old, mostly giggling; and my 17-year old, mostly horrified. There were folded arms, pursed lips, and once, when I made the mistake of parading through shirtless in a pair of decidedly undersized “skinny” jeans, outright hoots. Turns out, these particular trousers caused an anatomical displacement I am told is called a “muffin-top.”

But if merciless assessment is love, I am beloved. Eventually the jury approved one pair of pants, three t-shirts that didn’t advertise anything, and a button shirt that goes with my eyes while simultaneously minimizing the muffin top. That night when I took the stage I felt confident and grateful and then on the long drive home after midnight that t-shirt collected a drop of gas station hot dog grease and now it really suits me.