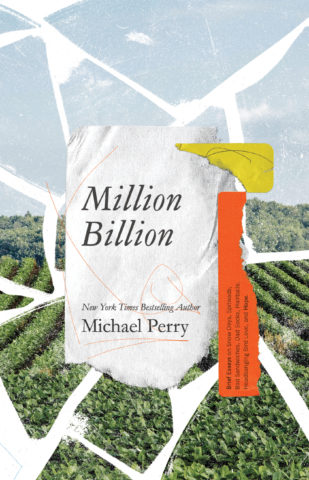 A while back I received the following email from a reader working his way through Million Billion:

Just received my copy, and as always I enjoy musing along with you at my own pace, always eager to embrace a new topic. I’m sure it comes as no surprise that it’s perfect sitting-on-the-john reading…you could market that angle. The question is what is the meaning of the cover artwork? I wish that were addressed.

First things first: When it comes to marketing, if someone at a book signing is wavering about buying one of my collections, I unabashedly invoke the “sitting-on-the-john” readability factor. I described this in the introduction to Roughneck Grace:

The last time we compiled a collection of these short pieces (From the Top), a man approached me at a signing, pointed at the stack beside me, and said, “That’s a great bathroom book!” Humbly, I nodded.

Some book covers I like at first sight. Others go through seventy-three iterations (the story of the original Truck cover is a doozy–one day I’ll write it up). The Million Billion cover was one of three designs submitted by graphic designer RT Vrieze of KNorth Studios (I worked with RT for years before it dawned on me that the “K” was silent…I’d been saying “K-North” like a doofus). Here are screen caps of the other two designs:

Both of these designs appealed to me, but the final choice was easy. There was something about the openness of it; the greenness of it. I also enjoyed the informality of the torn labels, the way the ridiculously long subtitle was lain in on the Y-axis, and how the mosaic effect represented the multitude of short pieces included in the book. And this kicker: The soybean field picture was taken right down the road from our place.

RT wrote this about his design:

I think it…has a little bit more of a modern “high art” look to it while still feeling inviting and approachable. The idea behind that one was to have a picture of a field (back 40 reference) and it’s in a bunch of pieces to play on the collection of short essays that that book contains. Also, I wanted to use some tape, scrap paper and sketch lines to play with the kind of ongoing process this collection is… feels like it’s kind of a collection of marks and random bits that could have been collected over the period of the essays

The choice was easy. That cover makes me feel both peaceful and matter-of-fact about what I do, and what the book contains.

I close with thanks to RT. As someone mostly keyboard-bound, I marvel at anyone who can convey content and spirit through imagery.