The local electric cooperative did us a big favor this week, removing the overhead lines that run from our house down through a steep wooded ravine and replacing them with buried cables. I doubt this was the biggest project of their year, but it was big to us, and we sure appreciate it.

I don’t know what the cooperative records would show, but on average over the fourteen years we’ve lived here it seems the power has gone out a couple times each of those years, and more often than not the trouble can be traced to the lines running that ravine. A branch separates from a storm-whipped tree, and off go the lights.

When you plug in the toaster at our house you are tapping the terminal end of the line, juice-wise. There are no other homes down hooked in beyond ours. This meant whenever the power did go out, we had to call, because it could be just us. I always feel bad calling because I assume the crews are already being bombarded and we know they’ll get to us as soon as they can, but if it’s just us in the dark, how will they know?

Just now as I’m writing this I realize it’s no longer 1969 and the co-op probably knows the power is off before we touch the phone.

Last year I decided it was time to buy a generator in case one of these outages lasted longer than usual. (You will note it took me over a decade to draw this conclusion—draw your own conclusions.) There was, as the saying goes, “some assembly required.” I strategically situated the box in the garage so I’d have to look at it every time I got in the van and be reminded to conduct said assembly.

Which is to say when the power went out three months later I knew exactly where to find the box and start assembling like sixty because there was about an hour of daylight left before I’d be working with a flashlight in my teeth.

At the very cusp of dusk I tightened the last nut, topped the tank, and yanked the starter cord. The generator came to life, and my daughter—who had been handing me wrenches—tapped me excitedly on the shoulder. “Neat, right?” I said, as usual unduly proud of the simplest mechanic achievement. Then I noticed she was pointing toward the house, which was glowing with incandescent light. The power was back on. She giggled at my impeccable timing, and I joined her.

With the new wires tucked safely into the dirt, we shouldn’t need that generator as often as anticipated. And that’s just fine. My wife and I stopped down to thank the crew and tell them we appreciated what they were doing. “We appreciate it,” said one of the hard hats, chuckling and nodding toward the ravine they’d come to know all too well over the years, usually during the most inclement of conditions. “Every time your address popped up, we knew what we were in for.” Now everyone chuckled and nodded, and for just a moment in this tangled world two perspectives converged, and if I’m making a big deal out of a little deal, I feel the same when I flip a switch and light pours forth.

Michael Perry grew up on a northwestern Wisconsin farm with a Willie Wiredhand sign at the end of the driveway. 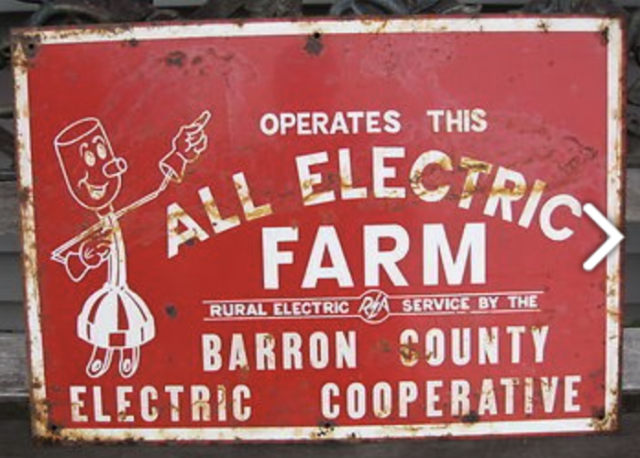