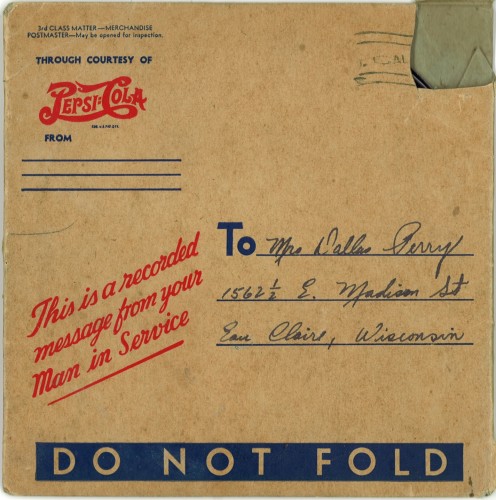 Shortly before he shipped out for Iwo Jima, my grandfather made a sound recording for my grandmother back home.  The recording booth was sponsored by Pepsi-Cola.  When my grandmother died, the recording, which appeared to be a standard 78 RPM vinyl disc, was passed to me.  I had never heard it and was tantalized by what it  might contain, especially in light of the fact that my grandfather had throat surgery when I was a very young boy and I only ever recall him speaking in a hoarse whisper.

I despaired of ever listening, however, when I opened the packet pictured above and discovered that the record was cracked and crazed over its entire surface.  When I mentioned this to Matt, a long-time acquaintance of mine, he surprised me by saying he had his own audio preservation company (I hadn’t known this) and was willing to see what sound he might be able to resurrect from the deeply damaged disc.  He also explained that the disc wasn’t vinyl, but rather a “cellulose-nitrate lacquer recordable disc,” and thus susceptible to deterioration.  “Oh,” I replied, “a cellulose-NITRATE lacquer recordable disc!  No wonder!”

I packaged the record in roughly six square feet of bubble-wrap, waterproofing, and crush-proofing and sent it on its way.  Frankly, I held out little hope the project would ever yield anything more than squawks and static.

It took some doing, but Matt performed a miracle.  I am now in possession of my grandfather’s voice.

I don’t have much more to say about the recording right now (I hope to write about it in time and after some reflection), but I do want to let you know that since then I’ve sent several long-buried family recordings (including decrepit cassettes and an ancient set of reel-to-reels) to Matt, and in each case he has returned startling-good digital versions.  So if you’ve got a treasure of this nature rattling around in a cardboard box and you’re scared to play it from fear of destroying it, consider contacting Matt at: matt[at]mrmaudio.com or through his website at mrmaudio.com.

From the MRM site: