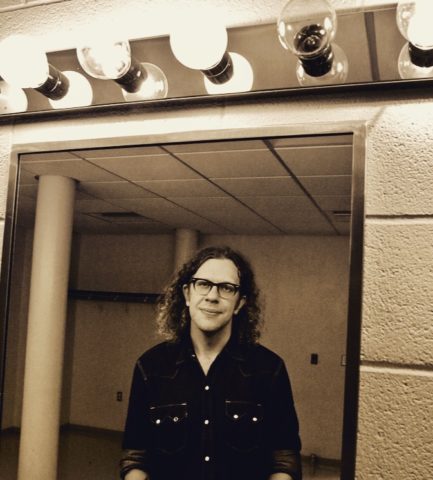 ON THE ROAD TO THE SOUTHLAND
BY HEATHER COOK

It’s autumn in North Carolina, and the southern sun is casting a golden filter onto the fiery-red dogwood leaves that scatter the roadside landscape. Phil is behind the wheel, one hand driving and the other gently holding mine as we turn onto an unmarked country byway. We’ve dropped our son off at school and are filled with a coveted sense of freedom for the day ahead. We start by setting our course to meander the open road.

This morning’s drive is not unlike ones we’ve taken in the past. For every project, album or other piece of music that Phil has created, we find a stretch of open highway, dial the volume knob to max, and drive the listening length of road. This particular trip holds more weight than those that have come before. Despite the autumnal perfection surrounding us, I can feel anticipation in my stomach and in Phil’s twitching fingers. Today he is sharing his newly completed solo record with me for the first time.

I’ve heard most of these songs before, or at least fragments of them. I had heard early versions when they came back from the mountains after being conceived. I hear them when Phil sings in the car between our otherwise monotonous errand runs, and I hear them as he sings our son to sleep at night. The majority of the creative process that went into this album, however, has happened within the walls of my husband’s prodigious mind and in a studio in the Blue Ridge Mountains. Today’s listen to the full production signifies that he’s finally achieved the sync of what he’s been hearing in his head for the past few years and what listeners will come to know as his solo debut. He is thus filled with a duality of pride and requisite anxiety.

When we moved to North Carolina from Wisconsin in 2005, a specific era of our adult lives melted in the rearview as we crossed over the Mason Dixon. I remember clearly that the majority of arguments Phil had laid out for me when pitching this cross-country move were focused on the artists and music that came from this swath of land. He had just picked up the banjo for the first time and was diving deep into the used gospel bin at the record store. Appalachia, The Delta, and the Bayou were all calling to him.

As we settled into the state, Phil slowly began to unravel and wrestle with the region’s own complex dualities. He, along with an incredible collection of creatives in the area, have been finding their sounds and voices within a regional paradigm that shifts and shuffles, ever so slowly, with the passing of each sweltering summer. Now, over a decade into our stay, Phil has become a staple in the area’s studios. He has produced, composed, written for, and recorded on dozens of regional and national releases. He is enthusiastic, steady and humble in his work. He is a partner and an ally for other musicians, drawing people together through subtle alchemy. Phil Cook has become a conduit of American music.

It is only recently that Phil Cook’s story has turned from one of a departure, to that of an arrival. Southland Mission is a soundtrack of shared experiences and Phil’s purity in leadership is self-evident from the moment the needle hits the record. The songs have no prerequisite, no pretension. Instead, as a collection, they call on listeners to witness and immerse themselves in their own journey. Placing focus on the way the tracks make them feel in lieu of searching for superfluous descriptors and categories. With this album, Phil is offering up his claim that the industry labels and genre constraints are rendering themselves irrelevant. Each track is a palpable glance back at the heritage of a our shared musical culture, subtly encouraging what will be a vital shift in keeping true artistry alive. Things tend to come into focus after a long journey, and this record is no exception.

I have cursed this record throughout it’s making, raising hell about it’s interruptions and inconveniences, but above all else, I’ve missed my husband. I’ve spent many nights rolling over in bed only to find his side cold and empty with the faint sound of strumming coming from some corner of the house. On walks, as he holds my hand, I can feel his fingers fretting along to the song he’s humming. Being present means something different when you have music coursing through your veins, this is something I’m learning and growing to love. Because despite my intermittent feelings of bitterness or abandonment, I know that what is coming is worth it and quite frankly, there’s no stopping it. The gravitational pull that brought us here has resulted in a collection of life and career-affirming moments that, when looking back, makes the decision to move here seem laughably inevitable. He was always preparing the path, whether he knew it or not.

So, throw open your folded arms and embrace the anthemic reveal of “Great Tide”, a sound big enough to fill a stadium. Absorb the percussive heartbeat under Phil and Frazey’s poignantly resonant verses on ”Anybody Else”. Hop in the truck and blare “1922” out of some blown-out speakers, then find a quiet place to plug in your headphones to hear every peak and valley of the guitar solo on “Ain’t It Sweet”. The lyrics tell stories of loss, layered with sentiments of self-doubt and intermittent promises of change. The compositions are Phil’s testament to truth in music, integrity in creativity and reverence for those who paved the way for these sounds to fall on our ears. Southland Mission is certain to compel you to stomp your feet, pump your fist, and sway and spin with reckless abandon.

Phil’s mission is far from complete, but for the first time in his life, it seems to be clear where he’s headed. Undoubtedly, with this record as our induction, we are all in for an epic ride.

Back in the car, Phil’s smile strains with anticipation. His eyes are tired and his hair has grown unruly. He’s poured himself out into this music, and while his reserves may be empty, his heart is brimming.

“You ready?” he asks, trigger finger on the play button.

I smile and nod. After all, it’s what we came here for.