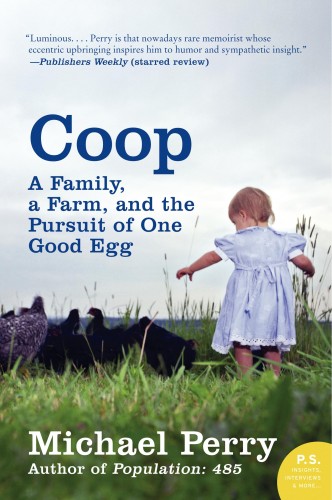 First, a thank you to Redbery Books and the Brick House Cafe in Cable for hosting the recent Spring Book Club dinner in Cable, Wisconsin, where the group discussed Coop and Coop. I get so many kind requests to attend book group meetings, but time, geography and calendar generally prevent it. I never forget, however, how much I rely on the word-of-mouth support I get from groups like this. So, thank you.

I am also frequently asked for a list of questions designed to help guide book group discussions. The Redbery Books group came up with one for Coop and have allowed me to share it. It follows after the break (and includes a ham joke).

Michael Perry regularly performs with his band, The Long Beds, in our area. If you’ve seen him in concert, was he similar to what you’d expect from his writing?

Which of Perry’s books did you enjoy the most? Why?

Perry is asked by his daughter to “Tell me about your child-hood.” Some children roll their eyes when parents start talking about their childhoods. Why was Amy one who asked for such stories? What stories from your childhood you like to share?

What “life lessons” are found in Coop? Do you agree or disagree with them?

How does Coop compare to other memoirs you have read?  Other books about farming and rural life?

Does reading Coop make you more or less inclined to raise animals and grow a garden?

How would you describe Perry’s writing style?

This book was on the bestseller list. How does this book “play” in other parts of the country? What is the appeal beyond the Midwest?

The hardcover title, Coop: A Year of Poultry, Pigs, and Parenting, was changed to Coop: A family, A Farm, and the Pursuit of One Good Egg for the paperback edition. Which do you think fits the book better? Why do you think the publisher changed it?

Have you raised chickens or pigs? Does Perry describe the process accurately?

What is one element from the rural lifestyle of Coop that you would like to bring into your own life?

Would Coop make a good movie?  If Coop were made into a movie, who would play Michael Perry? Anneliese?

Most of us have not lived in one zip code all of our life. Share different communities where you have lived. How does this match Perry’s opinion about different locales?

Have you ever been an EMT or “first responder”? How do you think these experiences have influenced Perry’s writing?

What did Perry do when he had a sick pig? He called the hambulance.

In Coop, Perry describes how his parents took in sixty or so foster children, man of the disabled and some terminally ill. How do you suppose this influenced his own parenting style?

Bev has described Michael Perry’s books as a how-to one being a decent human being. How does Perry’s writing style contribute to this? How is it it doesn’t come off as being boastful?