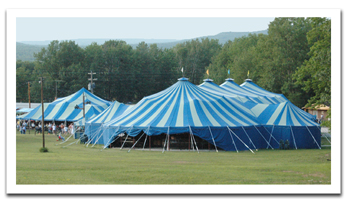 Yesterday I did a quick Twitter tweet (are there slow tweets?) about harmoni-cat Howard Levy. Howard will be on an upcoming edition of Tent Show Radio, but someone from Big Top Chautauqua just emailed to remind me he’ll also be appearing at the tent this summer August 4 with Bela Fleck and the Flecktones. Howard was in the original lineup of the Flecktones and recently rejoined.

Long before I ever had the privilege of performing in the big blue tent, my wife and I enjoyed shows up there, including a Greg Brown concert that kinda helped us decide to go ahead and get hitched. Really not a bad seat in the joint. I’ve seen shows from the front row and I’ve seen’em from the back, and the smile quotient never changed. It’s a cozy place, plus at intermission you can buy brats and beer. Or a sody-pop. This year the tent show celebrates its 25th year, and as with any shoestring (tent rope) organization, they’re always grateful for your support (and are sweetening the pot with a special chance to win a season pass).

The season will kick off June 19 with two-time Grammy winner and Australian (dude has to paddle some to get to Bayfield) Tommy Emmanuel, and as usual, the rest of the summer’s lineup includes flavors ranging from singer/songwriter to Cajun to 80’s pop to humor to live radio shows and everything in between (full schedule right here).

I’ll be driving up Bayfield way myself some this summer, to be a part of the following shows (info/tickets available at the links):

June 18 – Host of Chautauqua! A Blue Canvas Salute to 25 Years (info to come)

September 3 – Host, show yet to be announced.

September 4 – Host of Chautauqua! A Blue Canvas Salute to 25 Years (info to come)

See you in the tent…